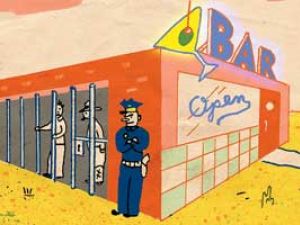 The United States has no shortage of strange drinking laws. While most are vestiges of days long gone — around the time of Prohibition or even earlier during the days of westward expansion — some are of a more recent vintage. While it’s hard to narrow the list down, we’ve picked out an odd, interesting and often hilarious set of examples. If you want to spend a few hours diving into the intricacies of our nation’s odd booze laws Wikipedia is a good place to start.

In Alaska It’s Illegal To Be Drunk In A Bar

That headline is not a typo. In our northernmost state (western and easternmost too!) the state statutes are clear that you cannot be intoxicated in a bar, which is obviously the place most people find themselves intoxicated. A few years ago, cops in Anchorage actually went undercover to arrest bar patrons who they considered to be “drunk-plus.” Outside of the bar, at say a house party marred by a Palin-family brawl, “drunk-plus” is just fine.

Forget About Buying A Cold Six-Pack In Oklahoma

It’s a hot summer day in Oklahoma and all you want is an ice-cold beer. If you plan on drinking it at home you’re going to have to wait a while to enjoy that brew — unless you’re cool with near-beer (who is cool with near-beer?). The state law here is clear: beers with greater than 4% alcohol-by-volume may not be sold from a refrigerated cooler. Lesson of the day? In Oklahoma it pays to be thinking about your drinking ahead of time.

Nevada, Where Public Intoxication Is And Always Will Be Legal

While public intoxication is prohibited in most states, often on the local level, Nevada’s state legislature has taken the oppsoite approach. Public intoxication is legal, and further, no government body, local or on the state level, is allowed to pass laws or ordinances turning public intoxication into an offense. In other words, you’re free to make a fool of yourself when in Nevada — a situation far too many of us take advantage of.

There Is No Happy Hour In Massachusetts

Happy hour is one of the little things that make the 9 to 5 tolerable for many folks. When the clock strikes five you punch out and meet up with some friends at the bar for a couple rounds of discounted drinks. It’s a win-win situation: the bar gets customers in the door before prime business hours, and folks doing some early evening drinking get a discount. Unless you’re in Massachusetts, where happy hours are illegal.

Utah, Where Your Drinks Are Made Behind The Zion Curtain

For a long time it was absolutely illegal in Utah for a bartender to prepare a drink for a restaurant customer where the bartender could be seen. The law still stands, and while some exceptions have been opened up, you can still find restaurants sporting Zion Curtains, which are usually frosted glass partitions that a bartender can stand behind while making a drink.

Kansas – Where Prohibition Didn’t End Until 1987

While national Prohibition in the United States ran from 1920 to 1933, states, cities and other communities enacted laws over a much larger span of time. Kansas banned all alcohol back in 1881 and they didn’t reverse this prohibition until 1948. Even then, if you wanted to purchase a drink “on-premise” at a bar or restaurant, relief didn’t arrive until 1987. While those are the state laws, over two dozen counties still prohibit on-premise sales.

Between the full legalization of marijuana and Boulder’s incredible craft brewing scene we tend to think of Colorado as a pretty permissive place when it comes to life. Every state has their limits though, and in Colorado horseback-riding-while-intoxicated is one line you should not cross. Back in 2013, a man named Patrick Schumacher saddled up for a 600 mile journey to Utah, where his brother was getting married. While that sounds like the start of a Wes Anderson movie, Mr. Schumacher’s journey was not to be. Police “pulled him over” when they saw that he was visibly intoxicated. Inside his saddle bag they found a pistol and beer cans, which earned him a trip to the local lock-up. Reuters has the entire story.

Don’t Even Think About Hitting On The Bartender In Nebraska

Hitting on your bartender or any of the other waitstaff is generally not a good idea, one that’s up there with the 25 other offenses on this list of bad bar behavior. Sure, sometimes they’re into you, but chances are they really don’t want to hear from another drunken patron four hours into a long shift. If you find yourself in Nebraska, in addition to annoying the staff, you’ll also be breaking the law. Here is the relevant text from section 019.01F1 of Chapter 6 of the Nebraska Liquor Control Commission Rules and Regulations:

“Disturbance” as used in this section shall mean any brawl, fight, or other activity which may endanger the patrons, employees, law enforcement officers, or members of the general public within licensed premises or adjacent related outdoor area. Such term shall include incidents involving, but not necessarily limited to: drug dealing; intoxicated individuals; soliciting of prostitution; or any physical contact between the licensee’s agents or employees and its customers, involving any kissing, or any touching of the breast, buttock or genital areas.

In Alaska You Cannot Feed Alcohol To A Moose

While it’s tough to verify this claim, we’ve seen it in reputable sources, including newspaper stories from nearly two decades ago. Whatever the case truly is, it would seem like common sense that it’s a bad idea to feed alcohol to a 1,200 pound, antler-topped animal. Why this prohibition doesn’t extend to bears is what makes us truly wonder what’s going on up north.