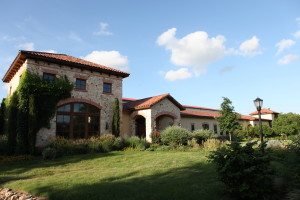 In 2004, when they founded the Duchman Family Winery in Driftwood, Texas — the “heart” of the Texas Hill Country and Texas Wine Trail — Drs. Lisa and Stan Duchman had a dream of sharing their passion for Italian grape varieties with their fellow Texan wine lovers.

In part, they wanted to do “something that no one else was doing,” says Stan, one of the premier cardiologists in the state and country today. But the true inspiration came from a love of Italian food, wine, and culture that the couple had nurtured since they first began to travel to Europe together.

“I grew up on a farm in Iowa,” recounts Stan, “and I’ve always wanted to return to my family’s farming roots. Building a winery in the Hill Country of Central Texas was the perfect way to do it. But while most of the established wineries there were focused on the classic French grape varieties grown in California — Chardonnay, Merlot, Cabernet Sauvignon etc. — Lisa and I wanted to work with the great food-friendly grapes of Italy, the same varieties that had accompanied so many unforgettable meals there.”

They partnered with two of the most respected names in the Texas wine industry, viticulturist Bobby Cox and grape grower Cliff Bingham, whose Texas High Plains AVA estate is widely considered one of the top farms for fine wine in Texas today.

“We knew that we needed the ‘continental’ climate of the Texas High Plains in the panhandle” of Texas, explains Stan. “The relatively cooler summer evenings are what makes the difference in obtaining the acidity-driven fruit that we were looking for in the wines we envisioned.”

The next piece of the puzzle was finding the right winemaker: Lisa and Stan reached out to Texas wine legend Mark Penna (now dearly missed after succumbing to a long battle with cancer in late 2011).

A veteran of some of the biggest names in the Texas wine industry (Ste. Genevieve, Llano Estacado, Cap Rock, and Rising Star), Mark embraced the challenge of bringing Italian grapes to Texas and in 2005 the team — with the help of Mark’s then-apprentice Dave Reilly — they already had their first vintage in the cellar. Early on, it became clear that Penna was the Texas winemaker who deliver world-class wines made from Italian grape varieties on a consistent basis.

An early success came when the couple presented their 2008 Vermentino — the white grape grown traditionally on the Italian riviera and the island of Sardinia — at a blind tasting at the 2009 Aspen Food & Wine Festival, where Texas wine prodigy and Master Sommlier Paul Roberts famously refused to believe that the wine had been made from grapes grown in the Lone Star State.

“That was a proud, proud moment,” remembers Stan fondly. “They didn’t have to like it, but they did. The quality of our wines were way ahead of my expectations. I never expected to be able to really, really, really enjoy the wines at the level.”

The next milestone came in the form of the first of what would be many accolades garnered by the winery: in the spring of 2010, the 2008 Duchman Family Winery Montepulciano was awarded a gold medal by the panel of wine writers and professionals at the highly esteemed Dallas Morning News International Wine Competition. Judges for the event included some of the top winemakers in the world, like Nick Goldschmidt and Daryl Groom, leading journalist like Patrick Comisky (LA Times, Wine & Spirits) and Mike Dunne (Sacramento Bee), not to mention some of the top wine buyers and sommeliers in the U.S. and Texas. Looking back now, it’s clear that this represented not only a defining moment for the Duchman Family Winery but for Texas winemaking in general: a Texas winemaker had showed an international audience that it’s wines could compete with world-class labels. And perhaps more importantly, it solidified Stan’s belief that Italian varieties — because of their versatility and generally high levels of acidity— were ideally suited for the emerging “Texas terroir.”

“Before I decided to become a winemaker,” remembers Stan, “if you would have told me that Italian grape varieties grown in Texas vineyards would be winning gold medals at international wine competitions, I would have thought you were crazy. But today I’m convinced, more than ever, that we made the right choice by moving forward with Italian grapes: they have the balance and acidity that we needed to deliver the wines that Lisa and I envisioned.”

Texas had finally produced a world-class wine… and the world was now listening.

But the moment that seemed to capture the attention of consumers in Texas and beyond was the day that Master Sommelier and Whole Foods Market regional wine buyer Devon Broglie made the 2009 Duchman Family Winery Vermentino and 2008 Montepulciano the first Texas wines ever to be offered to the stores’ patrons in keg and by the glass. As a leader in the locavore movement, the Whole Food Market embrace of the Duchman Family Winery as the leading wine in Texas galvanized the perception of the winery and Texas terroir as capable of consistently delivering world-class wines. And the exposure that the wines received — through direct contact with the tide of Whole Foods Market patrons and the media attention that the event generated — had made the Duchman Family Winery name synonymous with great Texan winemaking.

Devon recently added the 2010 Vermentino to the program at Whole Food Market. “What I like about this wine is its juicy, ripe citrus and floral aromas and flavors,” he explains. “But its acidity is what keeps the wine really well balanced. It’s great to see that the winemaker [Dave Reilly] is delivering consistently great wine with every vintage.”

[Mark Penna continued to consult with the winery despite the challenge of battling cancer. His student Dave Reilly took over winemaking responsibilities in 2009 and continues to serve as the winery’s chief winemaker today.]

“The quality of our wines are way ahead of my expectations,” says Stan unable to conceal his satisfaction behind his boyish smile. “I never expected to be able to really, really, really enjoy the wines at the level that I am right now. I’m happy with them across the board — the balance, the fruit and the acidity.”

Today, as the Duchman Family Winery continues to gather the accolades and medals, it’s incredible to think that Stan Duchman’s father was an Iowan soybean, corn, and alfalfa farmer. And even more remarkable to think that the family rare served wine at home.

“My father, if he were still alive,” says Stan reflecting on his humble origins, “he would think I’ve lost my mind.”