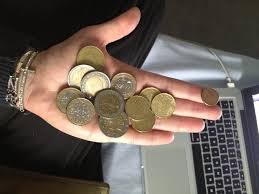 If you’re a European wine lover, you’ve probably read a story or two suggesting that the dollar’s strength versus the euro will lead to bargain priced wine bottles. While the dollar is valued at a twelve-year high versus the euro – around $1.07 to €1 – you shouldn’t go rushing to scoop up armloads of Bordeaux just yet. Here’s why:

In a perfect world the strength of the dollar would translate into cheaper European wines, but as is usually the case, reality is messier than economic models. In theory European wines sold in America should be selling for less than they have in the past, while American wines sold abroad should be rising in price and thus more difficult to push. So how do the dramatic changes in exchange rates actually affect American wine drinkers? The basic economic model above doesn’t take into account the fact that wineries are often resistant to lowering their prices, nor does it factor in America’s three-tier alcohol distribution system. Producers rarely sell to consumers directly, especially foreign producers; rather their wines are purchased by importers and wholesalers who sell those wines to retailers. We’re simplifying things a bit here, but this complicated system means that wine prices are both sticky and potentially irrational. While the strong dollar means that prices have effectively fallen for wholesalers scooping up European wines, there’s no guarantee that they’ll pass those savings along to retailers, and in turn, consumers. And, even if wholesalers slash their prices, absent local competition, there’s nothing stopping retailers from leaving the final prices as they were, keeping the savings for themselves.

Dave Holt, president of wine importer Dalla Terra, confirmed that American buyers of European wine might have to wait to see the strength of the dollar helping their wallets, stating, “There’s no guarantee that if we lower our price that that price will show up at the consumer level any time soon.” According to Wine Spectator, while some stores have started to knock down their European wines’ prices due to the rising value of the dollar, the march to inexpensive European wine is indeed a slow one.

Nicholas Jackson, a wine buyer at Sotheby’s, explains, “There’s really no incentive for anyone to reduce their prices when they know they could offer the same price and [the wines will cost] less for us than they were last year.” In fact, according to Wine Spectator, “Several château owners have hinted they will raise prices slightly.” So much for bargain priced Bordeaux…

However, there is some hope for European wine lovers living on this side of the Atlantic. Some European wineries are excited about what they perceive to be an American wine market ripe for the taking. With the potential for big sales they’ve been putting forth more effort – and money – toward improved by-the-glass and retail programs. Will these programs actually help consumers? That’s not entirely clear. While you may want to keep your eye out for a European wine bargain or two, don’t start buying Champagne in bulk just yet.

The post The Value Of The Euro Is Sinking: Here’s Why Your European Wine Won’t Get Cheaper appeared first on VinePair.