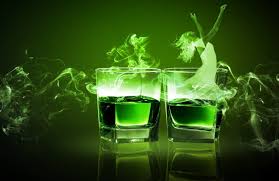 Remember the scene in Moulin Rouge where Ewan McGregor and his team of poets get a visit from the “green fairy,” aka absinthe? After a few sips, Ewan and his bohemian pals are blasted, their heads filled with psychedelic visions of a neon Kylie Minogue dancing and singing. The first time I watched the scene, I immediately thought, “I’d like to drink that.” So when I tried absinthe many years later, I was pretty disappointed to learn that the results of my consumption weren’t very different than a typical night of drinking. What gives? I thought. Turns out, absinthe won’t get you high, but there’s a pretty interesting reason as to why people thought it would.

Absinthe comes from the Latin absinthium, which comes from the ancient Greek word for wormwood, the primary ingredient used to make absinthe. Absinthe is also flavored with anise – which tastes like licorice – and sweet fennel. Although absinthe can be sweet, don’t let the delicate taste fool you: this spirit is alcoholic, very alcoholic. Typical ABV ranges from 45-74% (90-148 proof). Absinthe’s high alcohol content has to do with its notorious reputation, but you can also blame its good taste: the reason people began to trip on absinthe in the first place is because they loved drinking it – in big quantities. Absinthe’s scandalous tale starts in late 19th century France. French troops took absinthe to protect them from malaria. When they returned home, they brought their taste for the anise-flavored spirit with them. Over the next twenty years, absinthe became massively popular in France. It was served in bars, bistros, cabarets, and cafés, and it was drank by everyone, from the wealthy bourgeoisie to the working-class. However, by the early 20th century, the French began to favor wine instead of absinthe. Around that time, various countries also starting banning absinthe, claiming the spirit made you crazy and criminal. In 1912, the US became one of those countries, keeping the absinthe ban in effect until 2007, long after Prohibition was a thing of the past. Although it’s not a stretch to imagine the US banning a form of alcohol over something apocryphal, the ban still lasted an awfully long time. What else was contributing to America’s distaste for the green fairy?

Turns out, the true culprit is thujone, a chemical compound found in absinthe. In the early 20th century, French doctor Valentin Magnan gave wormwood oil to animals, who later had seizures. Later, thujone was isolated as the chemical causing these seizures. Magnan later studied 250 alcoholics and said that those who drank absinthe also had seizures and hallucinations. However, Magnan’s scientific understandings was limited given the time period, not to mention he was a bit biased given his puritanical views on absinthe, which he believed was destroying France. Yes, absinthe contains thujone, but in very small amounts. In fact, the amounts are so trace, that under the TTB’s guidelines, absinthe is thujone free.

That’s because according to the TTB, only absinthe made with over 10 mg/kg thujone is banned, but most absinthes actually contain less than that tiny amount of thujone. While thujone analysis had already proven this decades ago, it wasn’t widely known until the late 20th century. What followed next was simply proving that a lot of the absinthe out there was already legal. Since the UK, for example, had never officially banned absinthe, they began importing the spirit again in the ’90s. Meanwhile, in the US, there had been an official ban. So from 2004-2007, Absinthe brands Kübler and Lucid Absinthe Supérieure worked with their lawyers to make absinthe effectively legalized in the US.

In short, absinthe was never dangerous – no more than chugging vodka or shooting Fireball. While you can’t moderate how ridiculous the TTB is, you can moderate your drinking. Absinthe, when enjoyed responsibly, is definitely a treat. Spend some time with the green fairy today.

The post Why Is Absinthe Legal Now? Because It Wasn’t Really Illegal In The First Place appeared first on VinePair.

One thought on “Why Is Absinthe Legal Now? Because It Wasn’t Really Illegal In The First Place”